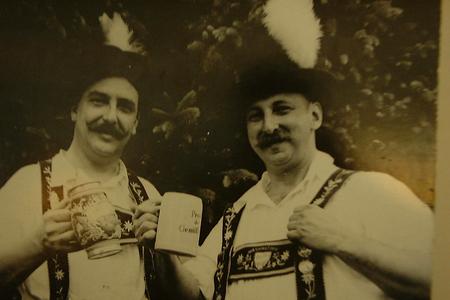 In the 1950's, Dave Rosenberg was a Navy leader in

This love for learning about and sharing culture and traditions led Dave into the DC International Folk Dance club and many other cultural organizations.  Here he met Rudy Poelsterl and in 1965, the two were instrumental in the formation of the Gauverband Nordamerika.

Through the DC International Folk Dance club and membership in another Bavarian club, Dave and Rudy met many other families with the same love of keeping cultural traditions alive.   In 1976, the Rosenberg, Poelsterl, and Bruckbauer families, along with Betty Heyman met in the Ratskeller of the Olde Europe restaurant in Washington DC to discuss forming a club dedicated to Bavarian and Austrian culture.  With the addition of the Edler and Hargreaves families, Alt Washingtonia was officially formed, joining the GauverbandNA in1978 under the sponsorship of S.G. Alpenland of Montreal.

Alt Washingtonia grew rapidly in the 1980's and performed traditional Bavarian and Austrian songs and dances all across the Mid-Atlantic region and was the resident dance group at Maxx Blob’s Bavarian Biergarten in Jessup, Maryland - home of America’s first Oktoberfest.

Over the years, Alt Washingtonia's members have had the opportunity to perform and educate at such notable events as the White House, the President’s Christmas Pageant of Peace, the Cherry Blossom Parade, the German Embassy and German Military Mission, the Smithsonian Institution Folk Life Festival, the Munich Oktoberfest, festivals across North America and every year for schools, community associations, churches festivals, and fraternal organizations.

Today, forty years after our founding, we continue to follow our founders vision of spreading cultural knowledge to enhance understanding between countries. At every event, following Dave Rosenberg's motto of "Never be a cultural coward", we spend time teaching the audience about Bavarian and Austrian history and culture.